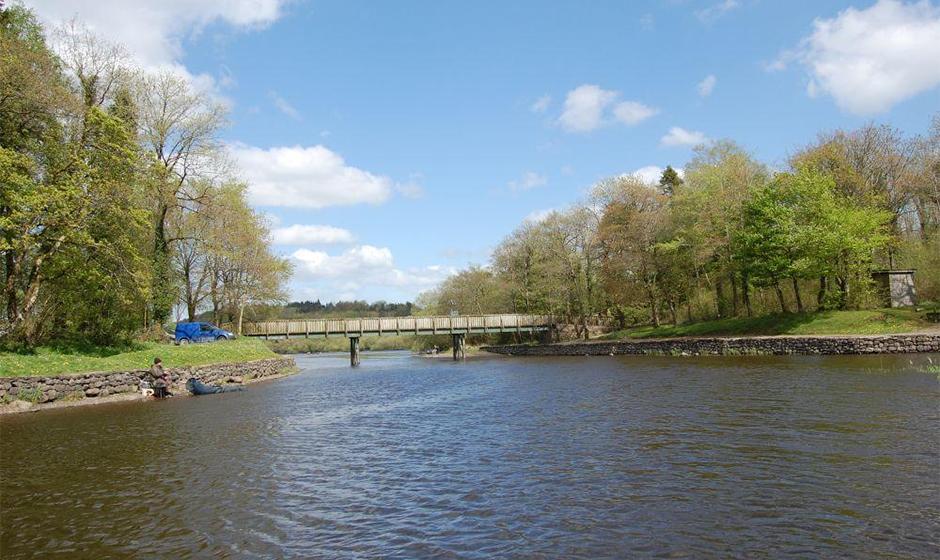 Located on a man-made island on Lough Oughter, the castle is accessible only by boat. It was built in the early 13th century by the Anglo-Normans but was soon seized by the O’Reillys who controlled it until the 16th century. The castle and lands were granted to Captain Hugh Culme as part of the Plantation of Ulster but were then seized by Irish rebels during the 1641 rebellion.
Clough Oughter Castle was used as a prison after the victory of Eoghan Roe O’Neill at the Battle of Benburb in 1646. The castle was finally abandoned after it was badly damaged during a siege by Cromwellian forces in 1653.

Sitting between Drumlane and Derrybrick Loughs, are the remains of a 6th Century monastery founded by St. Mogue, the Bishop of Ferns. The round tower is one of the most striking features of the site, standing over 11m high. Look for the carvings of birds on the external wall. The church features a number of interesting stone heads, one above the door in the west wall and another three on the external face of the east window. Near the church there are a series of earthworks, probably the remains of the 12th century Augustinian Priory.

Ballyhugh Arts and Cultural Centre is dedicated to the promotion and sharing of the rich cultural heritage of West Cavan. Courses are run regularly in arts, traditional crafts ,Irish music, and dance, creative writing and yoga. The house also houses a unique collection of artefact's and local photographs.

Cavan walking festival takes place every May with guided walks taking place over a week throughout the county. A really enjoyable week of walking is promised with mountainous walks, forest paths, lakeside trails and canal paths to name a few. info@cavansportspartnership.ie

Showroom and Workshop of original handcrafted Mohair Teddy Bears. Visitors can see how the Teddy Bears are made or participate in the making of their own special bear.  www.irishbears.com

Guided Cave Tours of the Marble Arch Cave take you on a subterranean journey. A carefully constructed path enables you to comfortably traverse the show cave whilst discrete lighting displays the cave features and delicate cave formations to their optimum. Our enthusiastic guides will lead you through awe-inspiring passages and further enhance your experience by interpreting the stories of this wonderous show cave.https://marblearchcaves.co.uk/


About three kilometres south of Blacklion and north-west of Cuilcagh Mountain lies a remarkable limestone plateau at an altitude of between seven hundred and nine hundred feet, which is now beginning to be recognized as one of the finest relict landscapes of its size in all of Ireland.
The Cavan Burren is now part of the Marble Arch Caves Global Geopark, one of numerous UNESCO Global Geoparks found across the world. Some of the forestry has been cleared and pathways and signposts have been provided to many of the archaeological and historical sites.

This small sum lets us know that you are genuinely enquiring and not a computer trying to send excess amounts of spam to our email account.

Accept All Reject All Settings